From Saturday 27th July until Saturday 3rd August several Boys from our Company joined our good friends of the 1st Kidderminster Company for a week-long canvas camp at a site near Abergynolwyn in the southern end of North Wales.

Although the camp took place after two weeks of unusually hot weather in the country, we were generally blessed with good weather. Some evenings and nights were a bit rainy and windy, but mostly the daytime weather was good, often sunny.

We departed Milton Hall (home of the 1st Kidderminster Company) early on the Saturday morning, heading to Abergynolwnyn via the increasingly-traditional rest stop of the cafe at Harry Tuffin in Churchstoke. We arrived shortly after midday and within a short time erected the four blue tents (which each sleep two Boys), as well as the new mess and cookhouse tents (this being their first real use on a camp); the old mess tent became the staff tent for this camp. On the Sunday morning the Boys and Officers were in Uniform to attend the morning service at the Baptist Church in the nearby town of Tywyn. After the service we had 'chill out' afternoon on the campsite, including the stream which runs through part of it, as well as walk up the nearby hill of Bird Rock. 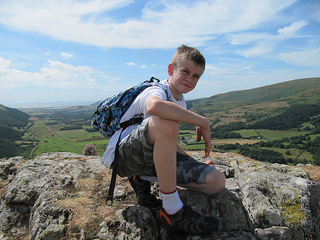 We began Monday visiting the market in Tywywn, where we spent a good proportion of the morning. Afterwards we headed back to camp for a short while for lunch, before heading back out. We spent the afternoon walking around the caves and waterfalls of the Dolgoch Falls.

Most of Tuesday we spent walking up to the peak of the mountain Cadair Idris, which lies in the southern end of the Snowdonia National Park. The ascent took us somewhere within the region of 2 hours, and the descent somewhat less than that. On the Wednesday morning we took the train from Tywyn to a rather rainy Barmouth where spent some time looking around the time, before heading back in the early afternoon. Owing to the weather - this was probably the only particularly wet day - rather than visit than then the Coed-y-Brenin Forest as originally panned, we then spent some time around the campsite.

We headed on Thursday to the Centre for Alternative Technology (CAT) near Machynlleth. Opened in 1973 the centre is dedicated to alternative technology, sustainable living and related topics; as ever it provided lots of practical interactive displays for the Boys. After staying at CAT over lunch time, we headed back to camp in the mid afternoon. In a change to the original plan, the Boys elected to spend Friday morning at the campsite, then in the afternoon we headed to the seafront at Tywyn so the Boys could spend time on the beach and in the amusement arcade. 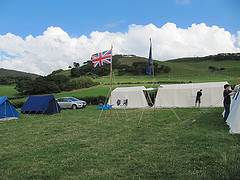 We were all up early on the Saturday morning to pack our bags, take down tents and pack the van. We headed back to the midlands to reach home by late afternoon - of course stopping-off at Churchstoke.

Click the play button below to see a slideshow of photos taken by myself (Rob Parker).