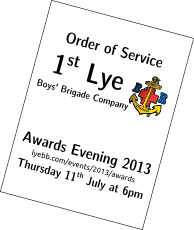 This is as ever the time of year when we recognise of the achievements of each Boy over the past year.

Every Boy in the Junior section received an award of some kind, with some of our newest members receiving their armband.

There were a number of awards and promotions in the Company & Senior sections, with Daniel Pearshouse chosen as the Company Section Leading Boy this year.

In addition to the Boys' awards, several Officers were also recognised for their long service to the Boys' Brigade - Margaret Mullett for 30 years service and Iliffe Attwood for 15 years service; it is also notable that when our friends at the 1st Kidderminster company held their Awards Evening in the previous week, Graham Knight (who is an Officer in both our companies) received an award for 20 years service.

Aside from the Presentation of Awards, Steve Bentham led a great sermon and Peggy Richards gave her Annual Report on much of the years activities (including the Spring Camp at Llandudno). Following the service, drinks and biscuits were served downstairs.

Please note this Awards Evening concluded our 2012/2013 Session and therefore no weekly meetings were held until we began our new 2013/2014 Session on Thursday 12th September.