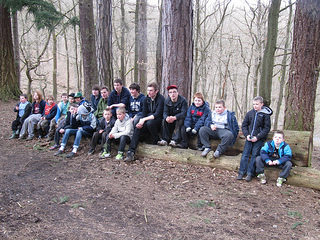 This Easter we returned to Coopers Mill in the Wyre Forest for our annual joint camp with the 1st Kidderminster Company. This camp took place from Friday 29th March till Tuesday 2nd April.

On the Friday morning, the advance party left Milton Hall around 11am to reach the Mill before midday. Most of the afternoon was spent constructing tents and the marque, as well as unloading supplies. The rest of 1st Lye were picked up at 16:30, with the remainder of 1st Kidderminster also being picked up sometime later. Once everyone had arrived, the rules of camp were explained, followed by our first evening meal. In the evening we played some games of capture-the-flag before Devotions.

The theme for Devotions on this camp was of course the Easter story (the death and resurrection), but also explored how God is timeless and unchanging, unlike us.

For those of us sleeping in tents, the Friday night was the first of many cold night's sleeps.

Saturday began, as is the norm with Coopers Mill camps, with the option of a cooked breakfast (in a sandwich or on a plate), as well as cereals - but on camps like these the energy is certainly burnt up. 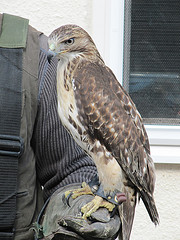 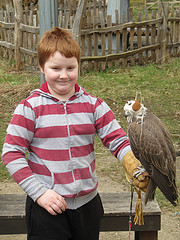 After breakfast we walked through the forest to the Wyre Forest Visitor Centre. Shortly after we returned to the Mill, we were visited by a former member of the 1st Kidderminster Company, who brought with him a Hawk and a Falcon. The Boys had a chance to hold the Hawk, and some other demonstrations of the birds were given. For lunch there were burgers and hot-dogs. 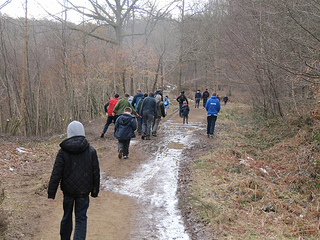 Later, in the evening following dinner we played a number of hackey and capture-the-flag games; the large expanse of mostly wooded areas, and darkness, at Coopers Mill certainly make such games more challenging.

We began the day early on the Sunday. Shortly after breakfast we were ready in full, clean and correct uniform in time to head off to Vernon Hall Free Church, where we hold the Easter service each year. As is traditional, the Church gave us all Cadbury Creme Eggs at the end of the service. 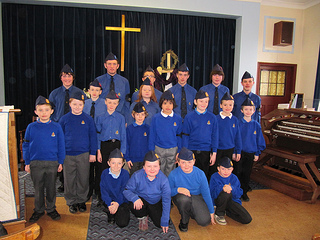 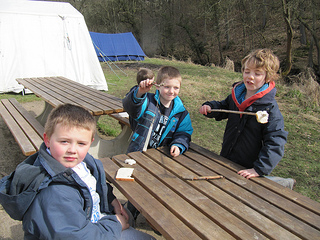 We spent the afternoon playing games such as tracker, capture-the-flag and 'zombies' in the daylight.

The evening was similar to those before - dinner, more games and Devotions. But for those of us in tents, the night was noticeably warmer than any of the other nights on the camp.

After a later rise than the day before, we headed to Bewdley on the Monday morning, giving the Boys an oppurtunity to spend their pockey money - not so much to wtiness the toy duck race which happened to be taking place on that day in the town.

The afternoon and evening were similar to previous nights, with a variety of games, interspersed with dinner and followed by the final Devotions.

Following a successful camp, we were up early for the final time on Tuesday morning to get everything packed away so everyone could be dropped back at their Churches on time.

Click the play button below to see a slideshow of photos taken by Graham Knight. Please note at the time of writing, these photos are in reverse chronological order.