For the first Camp of the year we held a weekend of computer gaming together with the 1st Kidderminster Company at their home, Milton Hall Baptist Church.

There were a total of 22 Boys on Camp, and for a number of our Boys it was their first ever Camp with The Boys' Brigade. 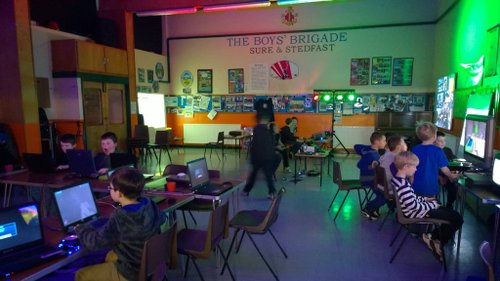 The Camp was a computer gaming weekend with numerous laptops and consoles - including PlayStation 2s, Nintendo Wiis, Xbox 360s, a PlayStation 3 and a PlayStation  4 - available to the Boys to use.

Such gaming took place on the Friday evening and much of Saturday, but we also went to Laser Quest in Stourbridge on the Saturday and finished the Camp by joined together in worship for a Parade & Family Service on the Sunday morning which focused on the theme of unity - with the close work of our two Companies over many many years being used as an example.