Over the Easter long weekend of Friday 6th till Tuesday 10th April the Junior, Company and Senior sections of our Company joined their counterparts at the 1st Kidderminster Company for our annual Easter Camp. This year saw a return to the much-loved Coopers Mill Cottage after two years away at the Far Forest Centre.

Below is a report on the changes to the Mill followed by the Events of Camp and photos.

Coopers Mill has been used for joint Camps between our Company and the 1st Kidderminster for many years. The location of the Mill deep in a Wyre Forest valley with a brook running alongside and large wooded areas to explore on each side certainly make the Mill a unique location for Camps. Those who are Officers today often recount memories from their time in Brigade, both in the games played in the area and life-changing moments during Devotions held each day during Camp. In the last decade we've held Easter, November and Joint Summer Camps at the Mill. Over the years leading up to our last Camp - Easter Camp 2009 - before the Mill was closed by serious damage caused by water leak, we had witnessed the condition of the Mill degrade considerably with little hope for that to change anytime soon. When we learnt of the closure of damage by an exploding water pipe many of us didn't expect the Mill we would be back at the Mill for future Camps.

In 2010 we stayed at the Far Forest Centre for our Easter Camp which, as shown in the map above, was not too far from the same forest area as Coopers Mill and the facilities of the building itself could be called more advanced; however whilst the Camps at the Centre were good they certainly missed elements found at the Mill. 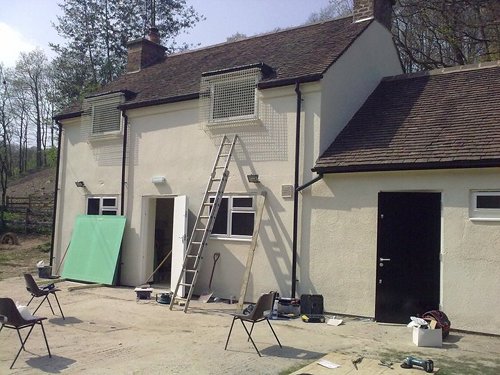 At some point in 2011 we learned that the owners of Coopers Mill, Birmingham City Council, had gained funding to renovate and restore the Mill from The National Lottery's Lottery Heritage Fund. During our Easter Camp that year we were staying at the Far Forest Centre for a second time but whilst continuing our tradition of spending a day of the Camp walking to and from Bewdley our route took us close-by to the Mill and we were able to see the progress in renovating the Mill and were very much encouraged by the high level of effort that it appeared was being made.

The renovation was completed surprisingly quickly and was ready for bookings by late 2011; even before the official reopening of the Mill we held our November Camp 2011 there and those who attended were able to see how much the Mill had changed. 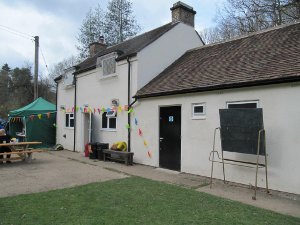 In March this year Bockleton Study Centre whom operate the Mill for the Council in recognition of our use of the Mill over many decades invited the Brigade to take part in their open day which officially reopened the Mill. Graham Knight and several other members of the 1st Kidderminster Company took part in the event, which attracted over 100 visitors, running a marquee showcasing Camps held at the Mill over the past several decades in addition to providing a park-and-ride service for the event to get visitors down to the Mill. Additionally a photo was presented by the Brigade to the Mill from Easter Camp 2009 which is now hung above the fireplace in the main room as a permanent fixture. 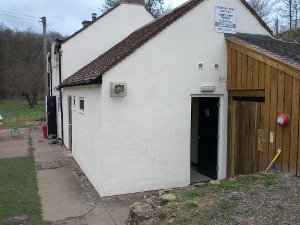 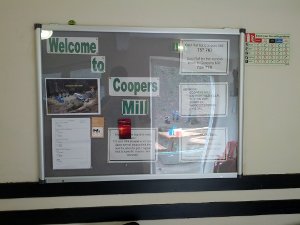 The Mill and new noticeboard

For those of us that hadn't been able to attend the November Camp 2011 (such as myself), this Easter Camp was our first time at the Mill since its renovation. From the outside the overall shape and structure of the Mill has been retained but the walls have been painted, windows have been replaced and some exterior doors have been added or moved, and a proper woodshed has been built at one end of the Mill. 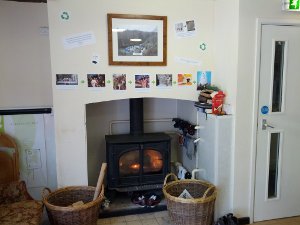 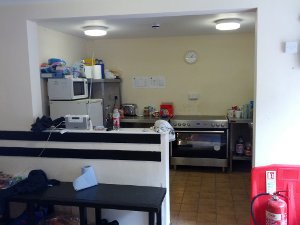 It's from the inside that the changes are more noticeable. In the main room the fireplace has changed from an open fire to a log burner which also provides hot water and heating for the Mill and the door used to head upstairs has moved slightly. Previously there was door separating the kitchen from the main room, but now the door and part of the separating wall have been removed creating a serving counter and generally opening up the two rooms. Heading upstairs, the main bedroom has improved considerably - the former storage boxes (upon which sleep bags were used) have been replaced with 3 pairs of bunk beds. Similarly the smaller rooms have gained new sets of bunk beds.

Heading back downstairs, the extension of the Mill Cottage which contains the toilets and showers has been improved considerably. Previously, there were ladies' toilets which were only accessible from inside via the kitchen, whilst the men's toilets were only accessible from an exterior door; the condition of both toilets (and showers) had degraded considerably with the rest of the Mill in the years leading up to the Mill's closure. With the new refurbishment, this section of the building has a completely new layout with new fittings, toilets and showers. The new men's toilets can be accessed both from an exterior door at one end of the Mill and from the corridor entered from the kitchen, and a new disabled toilet can be accessed both from an exterior door (close to where that of the old men's toilets once was) and the aforementioned internal corridor. All three sets of toilets have showers and even automatic lighting - seemingly a completely different world to the old toilets. 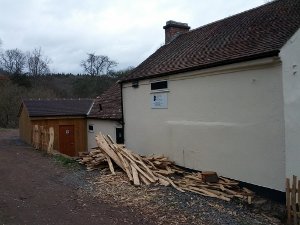 Views from the front and back of the renovated Mill

The area just outside the Mill has not changed drastically, save for new concrete-wooden tables and better exterior lighting provided by the Mill. Part of the forest area which is next to the mill on the same side of the brook as the mill has been cut down and replaced with a fenced area of replanted trees, and the nearby footbridge crossing the brook has been replaced with a wider and more substantial footbridge. Aside from this the surrounding area remains largely the same.

Whilst most of those on Camp were due to arrive on the Friday, some of us in the Advance Party headed to the Mill around midday on the Thursday. We took down many of the supplies and erected the blue tents and marquees. Later in the afternoon we headed to Bewdley in the minibus th the chippy for dinner. In the evening we played a few games in the area around the Mill, primarily Capture the Flag. The weather on the Thursday had been fairly good - somewhat overcast but no rain. That night those in the advance party were able to spend their night sleeping in the warm and comfortable indoors before the rest of Camp. 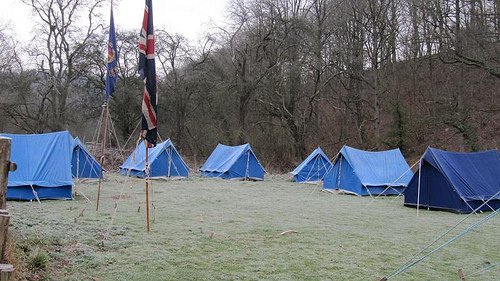 Early in the Friday afternoon the minibus arrived with everyone else attending Camp from both companies. After the younger Juniors had found their beds up in the Mill and everyone else their tents the Rules of Camp were explained before most of the rest of the day was spent playing a variety of games - the first time at the Mill for many - such as Capture the Flag in the large forests around the Mill. That even we held the first of the evening Devotions which focused on the theme of 'New from Old', using the renovation of the Mill as an example. Similarly to the day before the weather was somewhat overcast but was quite warm with some sun during the day - and most importantly, no rain. 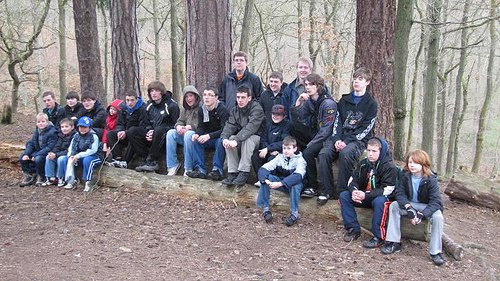 Each Easter Camp, even when we were away at the Far Forest Centre, we walk to the nearby town of Bewdley on one of the days of Camp; this year with the Monday being an an Easter bank holiday this necessitated heading to Bewdley on the Saturday. The weather for the walk was good and when we got arrived there were visits the the Teddy Gray's sweet shop and the chippy as ever. Later some of the younger Boys travelled back in the bus whilst the rest of us walked back. Over the afternoon and evening a number of games were played, including Tracker - which can be particularly challenging in a dark forest. The weather had stayed good throughout the day, and whilst the night was cold, there was no rain. 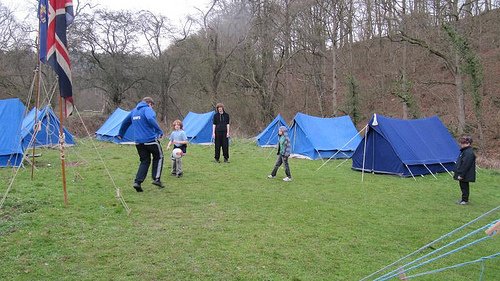 On the Sunday morning, as we have been doing for several years, we headed to the Vernon Hall Free Church to hold a Easter Parade & Service; during the service we presented the Church with a Boys' Brigade badge for the Queen's Diamond Jubilee, and later the Church gave each of us a Cadbury Creme Egg, as they have done each year. After the service we returned to the Mill and played a variety of games throughout the remainder of the day, with a Roast Dinner in the evening followed by Devotions. The weather was again good for the day. 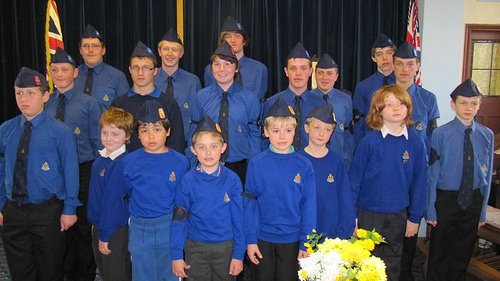 Up until Monday the weather had been good but early on the Monday morning intermittent fairly heavy rain began that lasted through most of the day. This was probably an introduction to some spending their first time in a tent why touch the canvas is not a good idea; despite the weather we did manage to keep ourselves entertained throughout the day, largely through those who'd brought smartphones finding their batteries quite low by the end of the day.

By the Tuesday morning the weather was actually very sunny at the Mill - but alas it was  time pack up, take down tents and pack the bus for the return trips home. In all the Camp had been a fun (if often muddy) introduction to the Mill for those who'd never been before, and a welcome return for others.

On each morning of the Camp (aside from Friday) both the tents and the rooms in the Mill were inspected - for tents this includes the state of tent (guide ropes, cleanliness) and in both cases the proper presentation of beds and laid out uniforms. For tent inspection the winning tent was Rhys Kay and James H in Tent 5; meanwhile the Juniors all scored well in room inspections, being surprisingly tidy.